Too often we forget that vintage style is not just depicted by the June Cleaver and Donna Reed's...it's the darker side that often inspires parts of today's huge vintage culture and toes the line of our imagination! 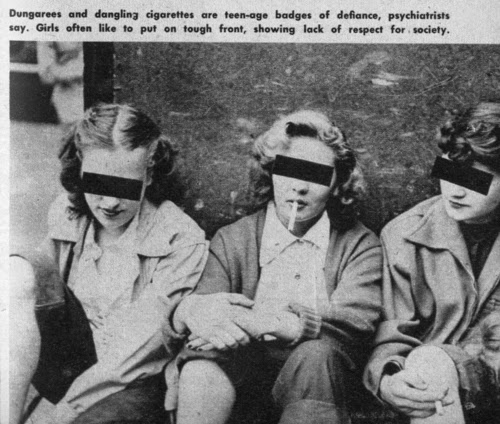 To explore what inspires this rising culture we went straight to the source...2 ladies that have been creating a dark uprising in the vintage culture here in Toronto.  Between the monthly "P*ssy Whipped Wednesdays: Dances the Cramps Taught Us" night at the Bovine and the "Dumpster Rock n Roll" vintage vinyl nights...I had to ask - what the what is happening?! These are clearly very steeped in vintage culture...but there is definitely a darkness and trashiness to it!  LOVE it...now tell me more! 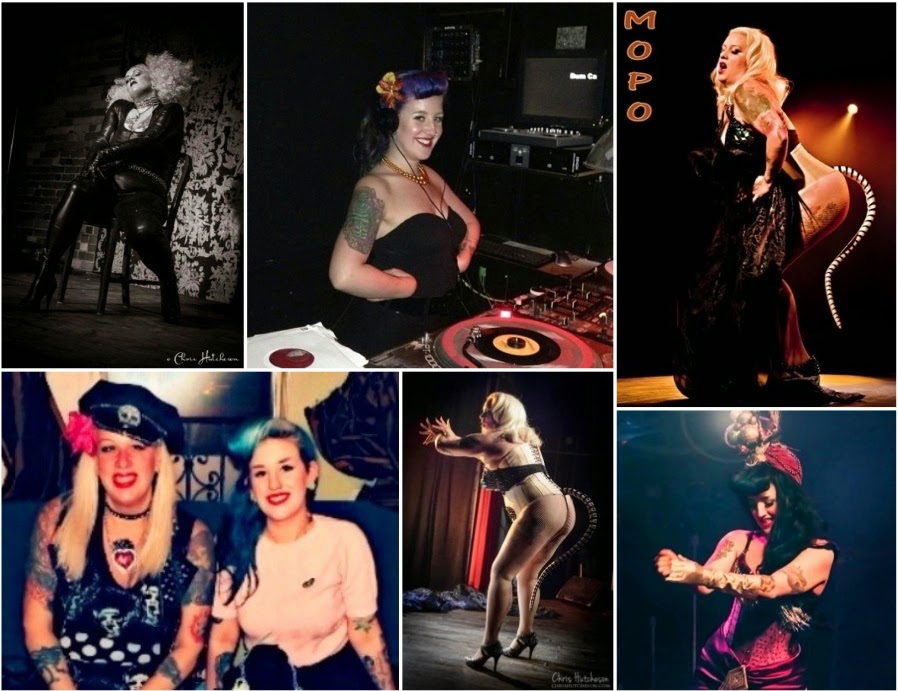 Q: What do you typically call this darker side of vintage?
TANYA: Trashy Bad Girl, LOL! It's an outlaw look for sure!
Q:  What eras and inspirations have most influence on this movement?

AVIVA: I have personally always been more attracted to the bad girl look of the 1950s than the June Cleaver. More juvenile delinquent than housewife. From a young age I discovered rockabilly, Russ Meyer, The Cramps and Bettie Page and everything just sort of progressed from there.

TANYA: It starts with the teenage juvenile delinquent movement in the 1950's with the birth of rock n roll. This was the first time were teens dictated fashion and music, it was all your parents stuff. Other youth cultures such as beatnik, mod and punk may be mixed in. B-movies or cult movies also have a big influence.  Monster movies, exploitation films, stag reels all have big impact. Personally I'm most influenced by The Cramps and Russ Meyer movies such as Faster Pussycat. Kill! Kill! 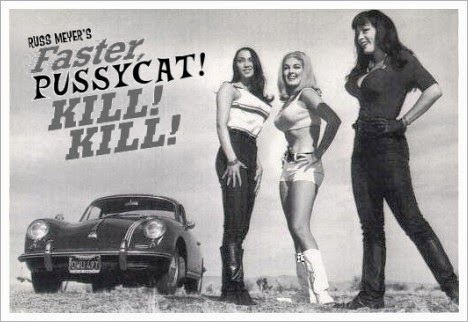 Q: Vintage aficionados seem to be drawn to the more typical 40s swing dancing, 50s housewife or 60s mod styles.  What draws their fans to what could be considered the dark and alternative side of typical vintage?

AVIVA: B-movies, grindhouses, desperate rock n roll sounds and juvenile delinquency! To me the music is very important, the desperate sounds of rock n roll are influential. Early rock n roll had a very definite growling sexuality to it all the while still being somewhat subtle. You can hear it in the first 10 seconds of "Woman Love" by Gene Vincent, hyperventilation and near convulsion on the tip of his voice. Thats the good stuff. The best rock n roll  to me is when the singer sounds like he is either on the verge of or in the midst of a nervous mental breakdown. If thats not a little dark , I don't know what is?

TANYA: Personally, I'm not attracted to what I refer to as "good girl" culture.  I identify more with the femme fatale or the vamp- I'm nobody's housewife. I'll burn your dinner but I can whip together a fantastic stripper outfit! It is harder to find the this type of clothing in vintage. you may have to rely on reproductions. 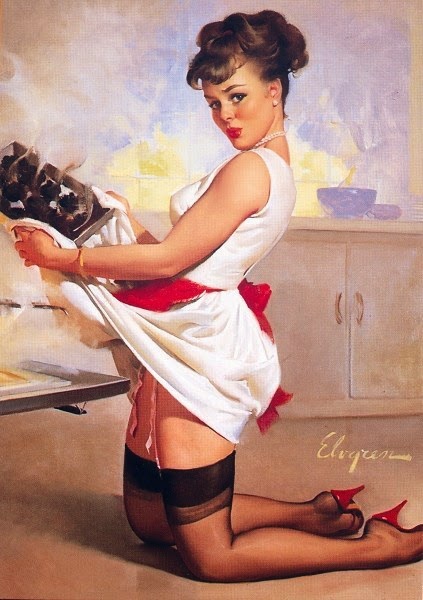 Q: Pin up is the most widely recognized version of vintage, but it often toes the line of cute day dresses and the dark side of the vintage style.  So, historically, do they share any attributes?

AVIVA: I personally just admire the weirdos of that time, the strippers, the crossdressers, the freaks making bizarro rock n roll like Screamin Jay Hawkins and Nervous Norvus. The outsiders! Having also been an outsider myself many times in life, these types of artists on the fringe really speak to me. Like John Waters says "the people who don't even fit into their own subcultures". Everything that was shocking in the 1950s seemed even more taboo, underground and perverse because of the wholesomeness on the surface of the era. I think its interesting to lift up the rug and see the dirt, the cultural detritus of a pure and virtuous time period.

TANYA: I think Pinup has some influenced the modern interpretation of dark vintage but it's too coy.. Nobody really tried to dress under the category Pinup back in the time.  Some key pieces you see in the darker side of vintage are leather biker jackets, tight capri pants or hysterectomy pants, halter tops or off shoulder peasant tops, lame jumpsuits, pencil skirts or wiggle dresses. You may say this look is influenced by the pink ladies in Grease or John Water's Cry Baby. It's not girl next door, it's the girl your mother warned you about! 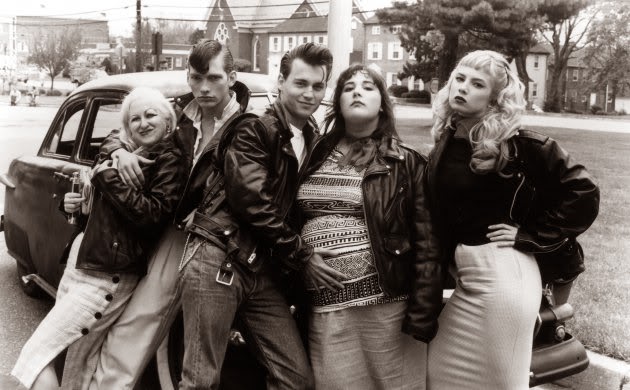 Q: any vintage patron cringes when vintage gets lumped together with typical versions of the idea (ex 50s = marilyn monroe).  Do you feel the same way about this style getting lumped in with pinup and rockabilly...or are you OK with it?

AVIVA: I think a lot of people associate darker styles of vintage with the music and aesthetic of psychobilly. Personally, I am not a huge fan of the psychobilly movement, songs about zombie girlfriends seem to be a dime a dozen and there's nothing really spooky or interesting about it at all. If you want spooky look to the novelty music of the 1950s for the true gems of the dark side. That is what Lux and Ivy did, they looked to the trashy rock n roll of the 1950s to help form their very distinct and basically uncategorizable sound. The music of The Cramps is largely covers of trash from their personal record collection.

TANYA: Those subcultures are too narrow for me as is the psychobilly label. I don't really mind them being lumped together really. I throw rocker slut into my mix too. I also work in vintage retail so it bothers me more when customers have a vague uneducated idea of what they're shopping for. I try to set them straight and help them. Pinup itself is soooo broad. Do you mean like an Elgren type look, a Bettie Page dominatrix look, or a greaser girl look? Something may be made in the 80's but still have the look. You can't be a purist about it. The hair and makeup tends to be of an exaggerated  version but still glamorous. Heavy eyeliner and jacked up hair - often dyed to the extreme. 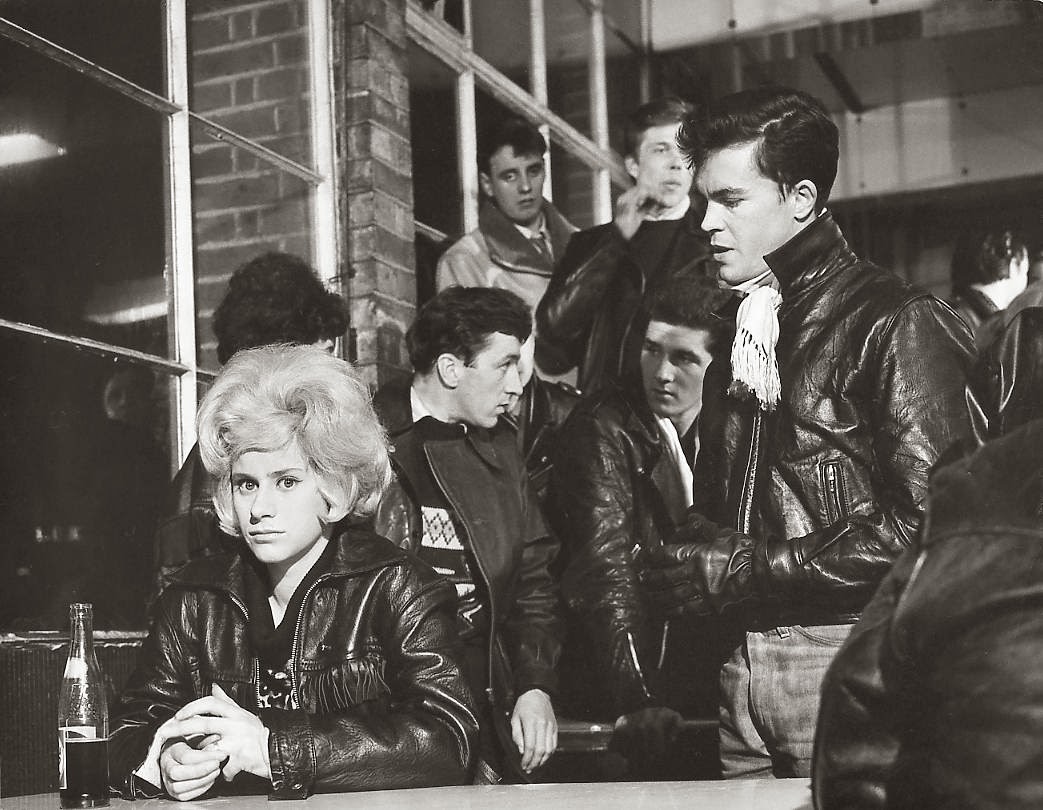 Lux and Ivy (The Cramps)

Q:  I hear of the music referred to as "bump n grind" and 'titty twistin" (LOL)...what does this mean to someone who may venture in to this world??

TANYA: Bump n grind is the sax heavy bluesy music of strippers in the 40's and 50's. The musical punctuation is easy to hear and gave the dancer cues at where to bump n grind.   The Stripper by David Rose Orchestra is the most widely recognized piece of bump n grind.  Titty Twistin' may also refer to outlaw rockabilly such as Charlie Feathers or raunchy blues such as Andre Williams. Any number of the bands the Cramps have covered.  Some female vocalists like Wanda Jackson or Sparkle Moore may be included. Dirty novelty songs as well. 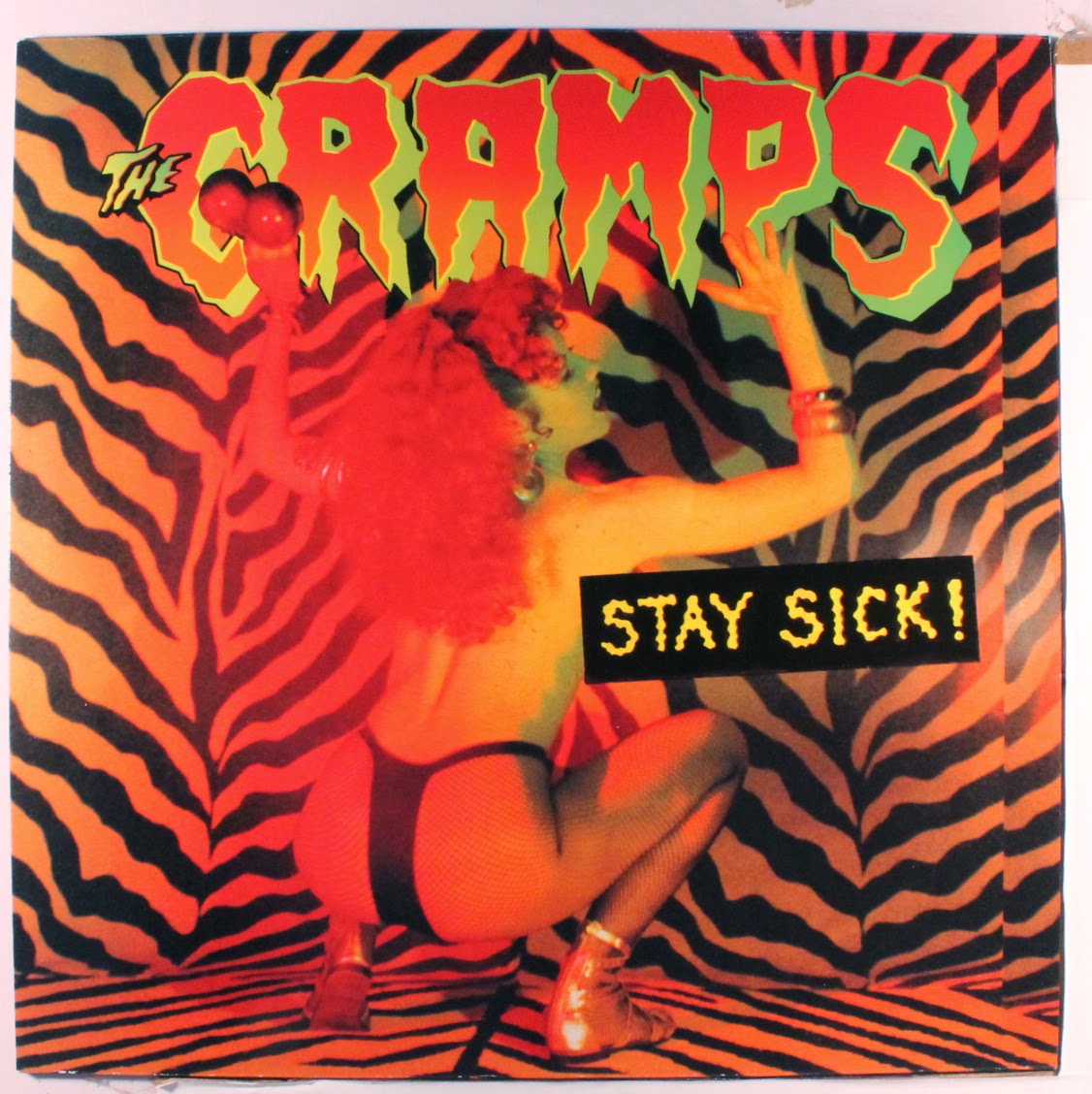 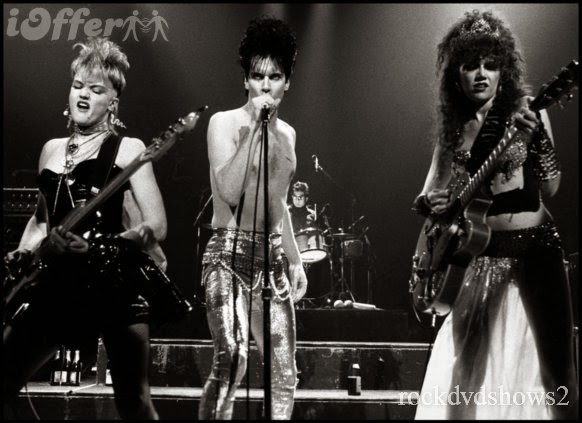 Q:  Which Toronto performers and venues typically embrace this culture?

TANYA: Well Aviva and myself, being burlesque performers often do shows in this vein and we certainly dress the part. Dolly Berlin, Laura Desiree, Roxi Dlite and any body  from Great Canadian Burlesque or Skin Tight Outta Sight Rebel Burlesque. Cherry Cola's has it's Sinful Sundays Night, anywhere Aviva is spinning from her vast record collection, and of course our Dances The Cramps Taught us monthly party at The Bovine with Laura Desiree. (May 14th) 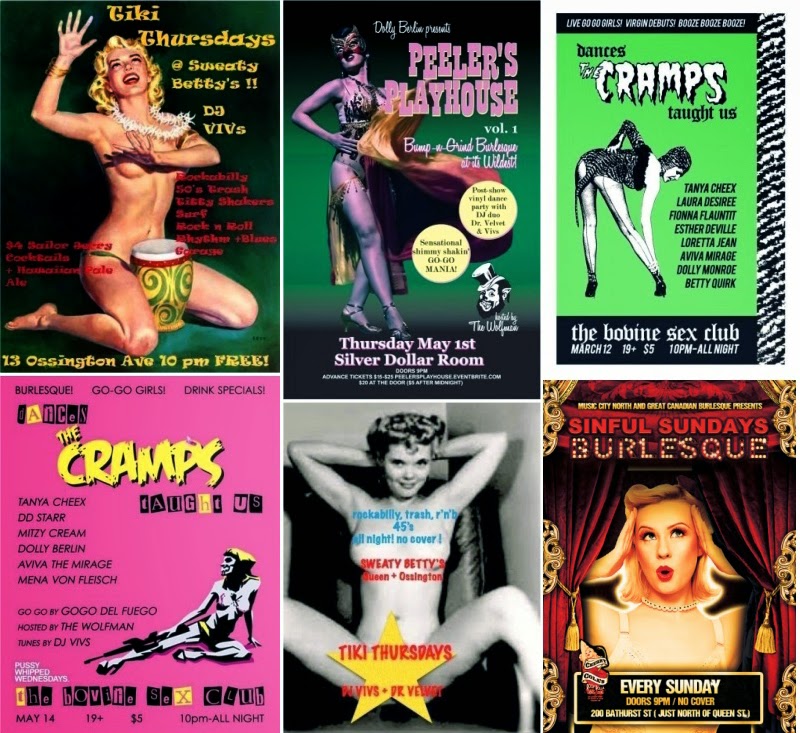 Q: If someone wanted more history on the era and style...what should they listen to, watch, read?? 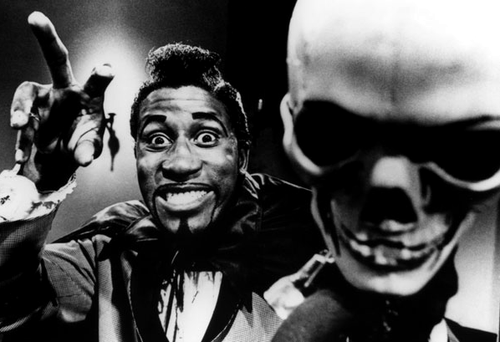 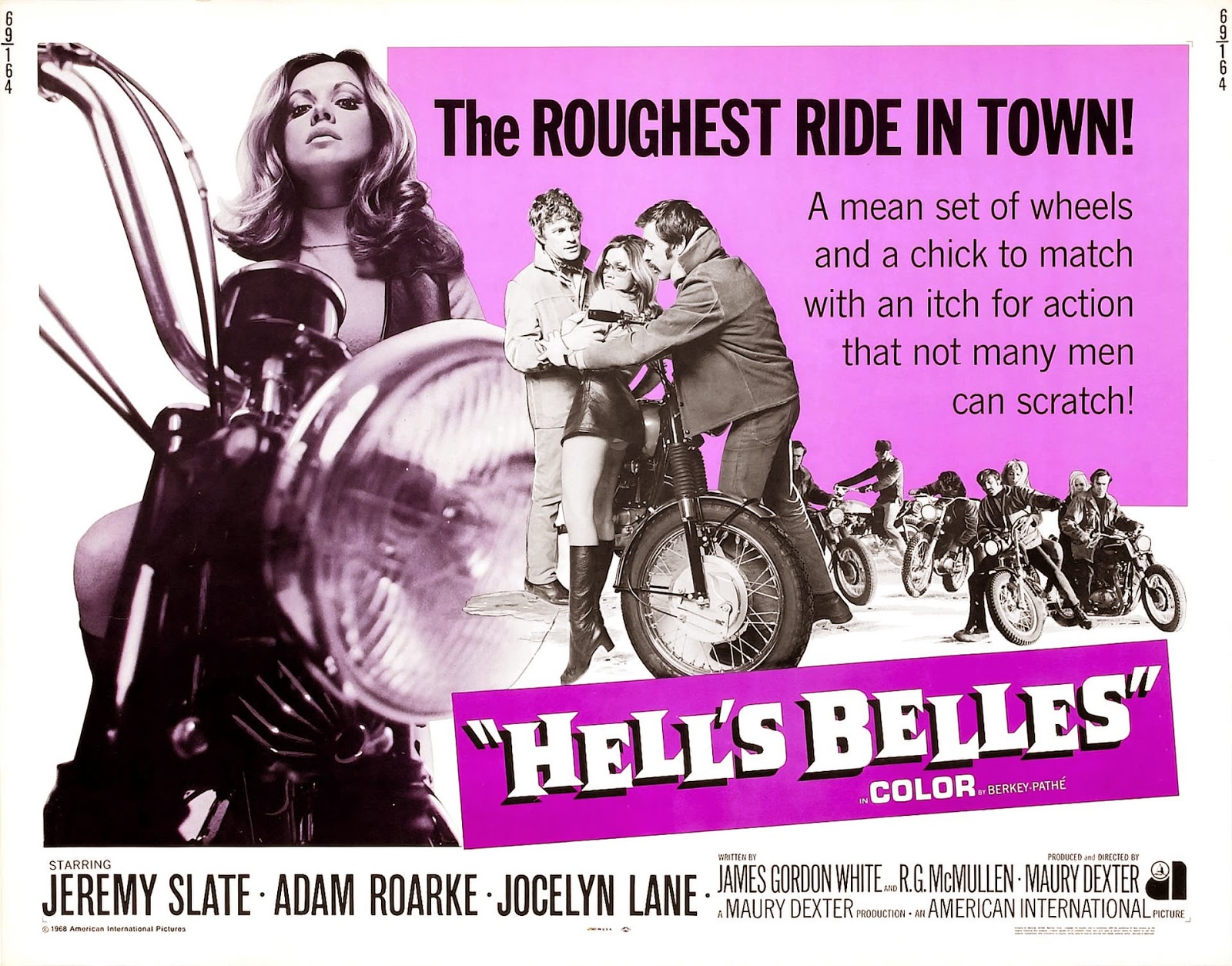 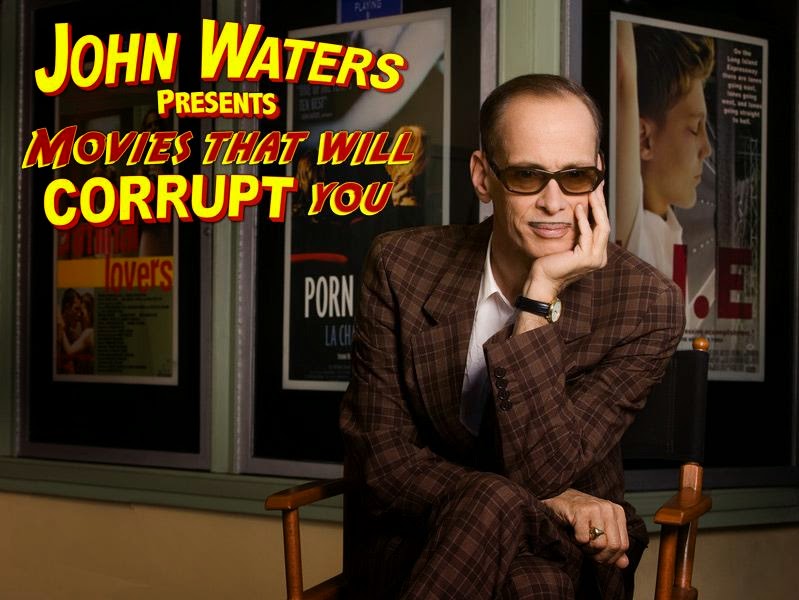 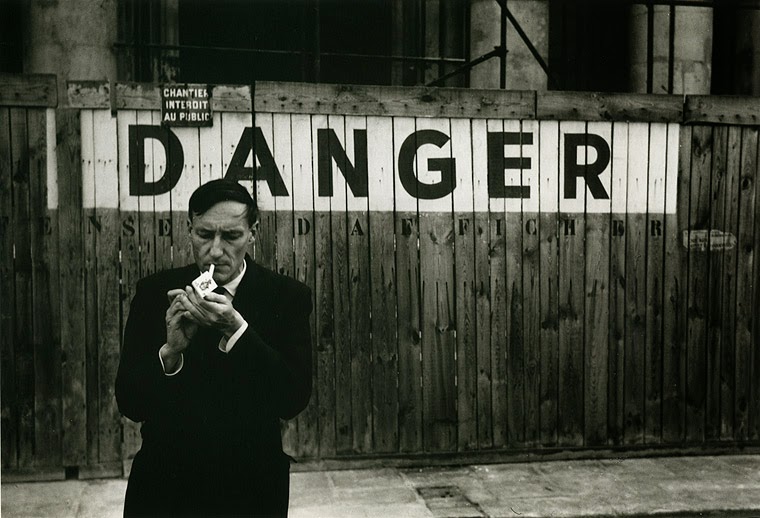 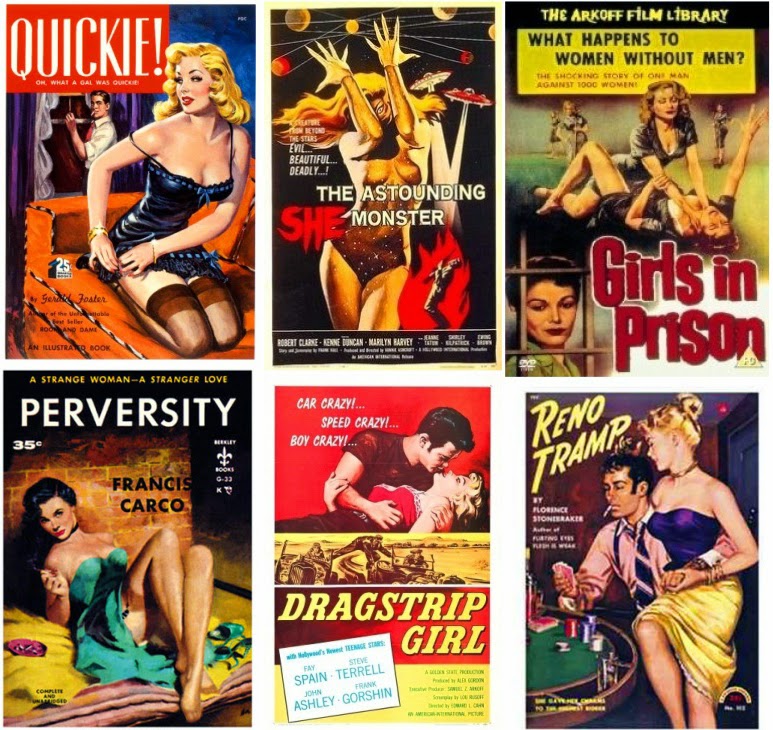 Pulp novels an B Movie posters

AVIVA and TANYA:
Come to our burlesque shows and DJ nights.  Come drink with us for an evening and that will definitely give you a glimpse into bad behaviour! 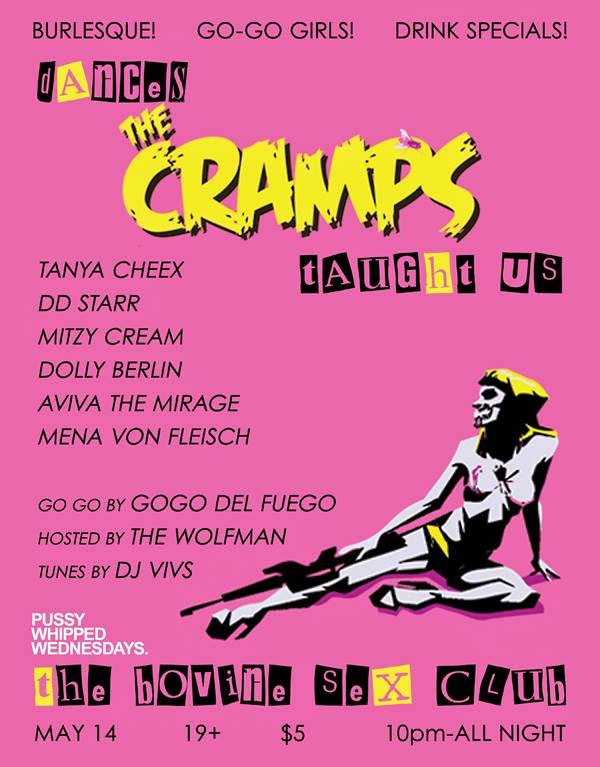