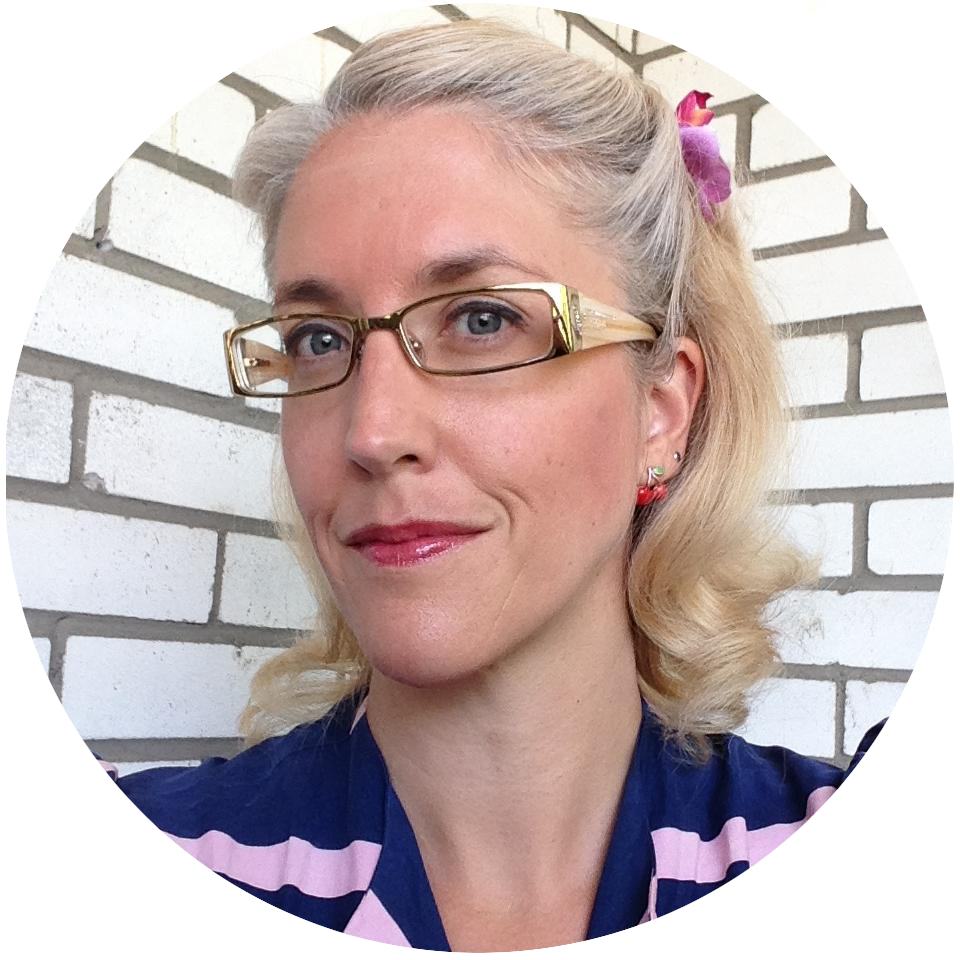 We are proud to welcome Liz, a very important member of Toronto's vintage scene, and The Toronto Vintage Society, with a guest blog post about Toronto's Rockin' Rockabilly scene! She also has an amazing blog, The Vintage Inn, be sure to check it out!


If you have never visited Toronto then you might not be aware that we have an AMAZING music scene. It is 100% true that you can come and visit our city on ANY Night and find first class live music to listen too. One of those scenes is the Rockabilly scene and Toronto is very lucky to have several amazing bands right on our door step and currently a regular monthly rockabilly night as well!

For this blog post today I want to shed the light on some of the amazing Rockabilly Music right here in Toronto and surrounding cities (some are ones I know well and some are ones I don't but they are all amazing).

(Note: I'm sure I missed some bands and I do apologize)

Millwinders are great and have this great traditional rockabilly sound that is just fantastic. If you ever get to see them live they are loads of fun (and they are all super nice!) and if you like vintage style then Sarah (the only lady in the band) is your gal. Her vintage style is drool worthy AND she is a Toronto Vintage Society member too.

The Swingin' Blackjacks have this great blend of Rockabilly and Jumpin Blues that  you can easily dance the night away to them...and TVS has. Matt and the band always put on a top-notch show and you can usually catch them playing somewhere in the city, several times a month. Very hard-working band.

The Royal Crowns don't play a ton of shows so when they do play you must check them out. Their sound touches on many genres of music-rockabilly, rock and roll, hillbilly jazz, surf, and rhythm and blues to name just a few. Also 2 of the members "Teddy Fury" and "Danny Bartley" have deep musical roots stretching back to the early ’80s, playing in key bands such as The Bop Cats and Shotgun Shack (source). So this band has a strong Rockabilly background.

TVC is headed up by the very talented and charismatic "Big Rude Jake" who has had a long and successful career in Rockabilly, Jazz, Swing etc. and it shows in his music. This band is always putting on a good show.

Video Note: The dancers in the "dark" in this video are friends in the scene.

Self described as the "Reigning Canadian champion of "Hillbilly Bop" – a style that combines the best of Honky tonk, Country Swing, Roots Rockabilly, Jazz and Blues Alistair is another show stopper. TVS has seen him play the Rockabilly Brunch at the Dominion on Queen many times (as well as many other events) and he always impresses every time. He is super fun to dance too as well.

The Kat Kings have this great Bluesy/Rockabilly (Bluesabilly?? lol) sound that is just so sweet to listen too and dance too. They are another hardworking band that perform all over the city and beyond. Always try to check them out when you can.

Ginger is an outstanding vocalist and great performer. To sum up her style there is a great quote on her website that says: "Raunchy, sassy, bluesy, rockin' with a good-sized dash of jazz AND country, this is a total delight to the ears of any connoisseur of great music. - Tara Jennings"

The Hell Bent Rockers are an awesome band from just outside of Toronto in the city of Hamilton. There sound is high-energy mix of classic rock & roll and authentic 50's rockabilly. They will be performing at this Friday's Rockabilly Shakeup at the 3030.

The Greasemarks according to their website describe themselves as "Leaving a trail of stained pillows, broken hearts and busted amps in their wake.The Greasemarks have been doin' 50's rockabilly loud, nasty & right since 2007". TVS has seen this band a few times and we have to say this statement is true :)

Another great band from Hamilton, the Diamond Drapes are a well dressed band with a classic Rockabilly sound and you know how TVS likes their vintage style. Like to dance? This is a band that will keep your feet moving all night long.

Ronnie has been playing his rockabilly brand of hobo country for years now. Prior to forming his own trio in 1989, he had already played and written songs on several albums and had been a member of Jimmy Roy’s 5 Star Hillbillies, Herald Nix, The Nervous Fellas, The Bughouse Five and countless other rockabilly and roots-based bands. He has released eleven albums of his own, nine of which are on European labels (Source).

Love Retro Style AND a beautiful voice? Then Heather is your gal. Her signature sound appeals to country, rockabilly and bluegrass audiences alike. Check her out below, I know we are a new fan now.

----------------
Extra Music Note: Toronto has also a number of Psychobilly Bands that have a real following as well and are very good if that is your favourite style. Bands like:

For regular updates on the scene here in Toronto make sure you visit Toronto Rockabilly,  "Like" the Facebook page Rockhouse T.O....AND make sure you follow US the "Toronto Vintage Society" who is always up to date on all events, Rockabilly and beyond, in Toronto.

We'd like to thank Liz for the great post, and hope you've all discovered some happenin' new music!

Posted by Toronto Vintage Society at 8:39 am 2 comments:

Loads of heavy hitting events in Toronto
this weekend!


You better get out and enjoy before
the hibernation begins! 
As always...please forward on any other event information! "Toronto's Museums & Heritage Services will pay tribute to the sacrifices made during the war on the battle front and at home in countries around the world. The stories, keepsakes and heirlooms associated with those who made these sacrifices have been passed down to their descendants living in Toronto today."

Toronto's Great War Attic will create a legacy for Torontonians for generations to come by documenting the stories and keepsakes with events and Pop-up Museums in heritage sites all over Toronto starting September 20/21 through to November 2018. 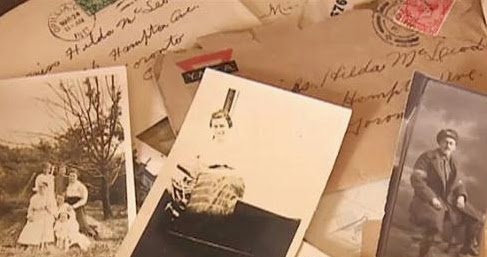 ABOUT THE PROJECT (via www.toronto.ca):
The First World War 1914 to 1918, known at the time as the Great War, shocked the world with its catastrophic global reach. Unlike the Toronto of 1914 to 1918 when the city’s population was 85 per cent British descent, at least half of today’s residents come from all over the world. There are more than 230 self-identified ethnic groups in our city.
Therefore, we have an unprecedented opportunity to collect personal stories and images of keepsakes and heirlooms passed down from many countries by those who lived through the war, either in military service or on the home front, to their descendants who are now living in Toronto.
Through such a collection, we can present the war from multiple perspectives - allied nations of Great Britain and Germany; neutral and colonial nations in Europe and Africa, which inadvertently served as battle zones; and life on the home front in lands directly under attack and others, such as Canada, which were never battle zones but whose populations contributed to the war effort. 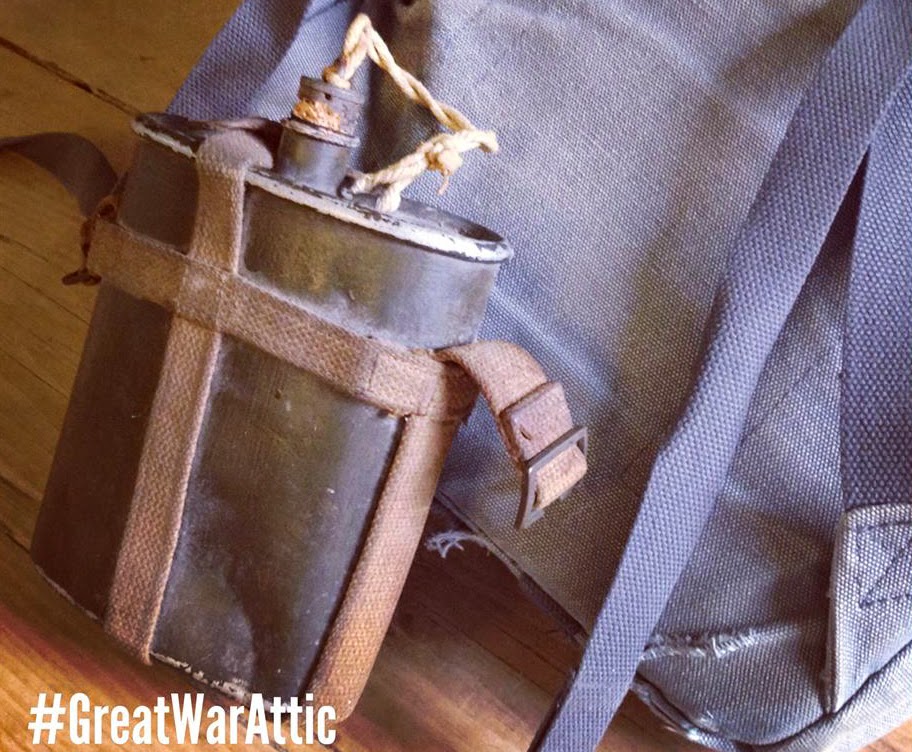 Additional WW1 Exhibits at the new Fort York Visitor Centre:
September 28, 10am-4pm - Recipe for Victory: Great War Food Symposium
Fort York National Historic Site, in partnership with the Culinary Historians of Canada, present a special food symposium that explores the fascinating history of domestic and military food and beverages during The Great War.
September 19, 2014 - September 2015 - The Great War: in Your Cellar, Closet or Storage Locker!
This exhibition in the Fort York Visitor Centre's lobby draws on the City of Toronto's artifact collection to tell the story of typical small objects reflecting Canada's participation in the Great War.
September 19, 2014 - September 2015 - Outfitted for War: Canadian Uniforms and Weapons of the First World War
The Vault – is the setting for rarely or never seen before objects from the City's artifact collection. Outfitted for War consists of five display cases and associated text and image panels. Each of four vertical cases contains a uniform representing different forms of service by Torontonians during the Great War.

Do you have any artifacts or photos in your family from WW1?

Here are some additional images of Toronto during the Great War... 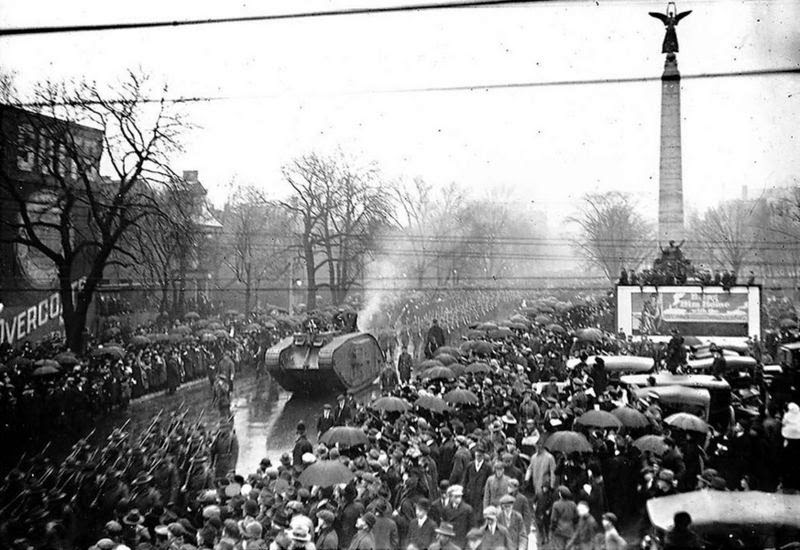 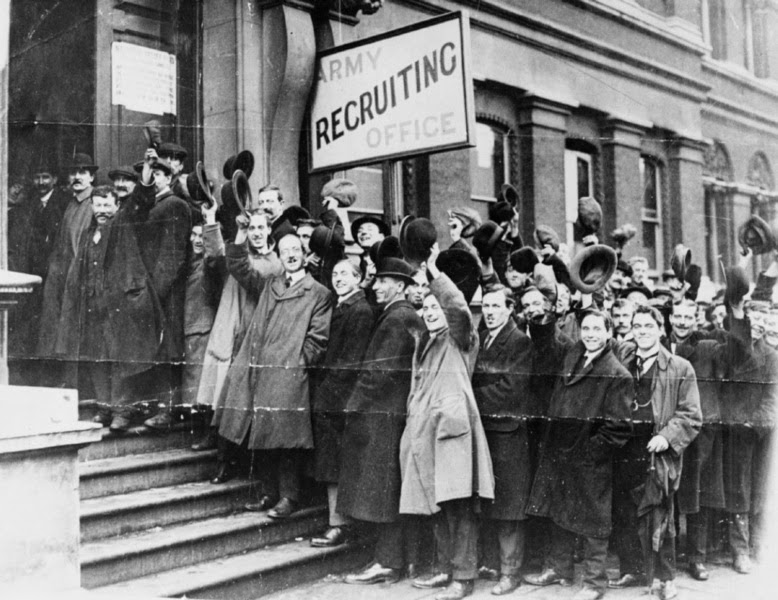 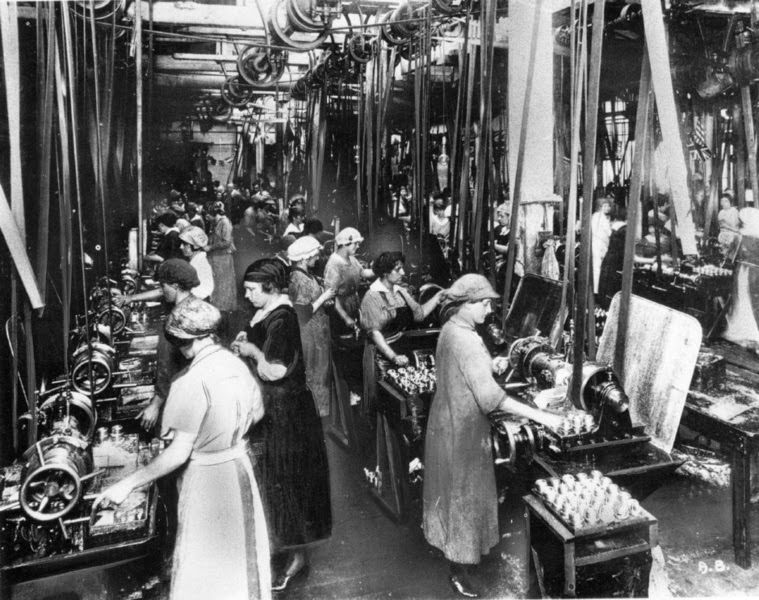 Women in a munitions factory in downtown Toronto 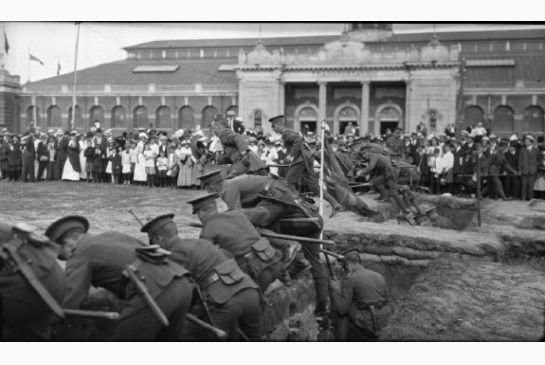 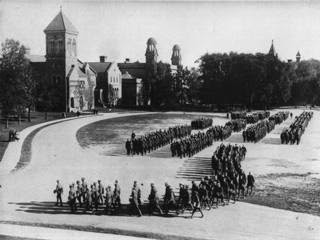 In formation at U of T