Heather Ballentine is gearing up for her “Rockin Retro Party” this coming Wednesday at Lula Lounge to celebrate the release of her new album "The Cat's Meow"!

We met Heather at OLD SCHOOL restaurant for a Southern style meal to discuss her history, her influencers, her new album, the upcoming show...and of course her signature pin-up style! 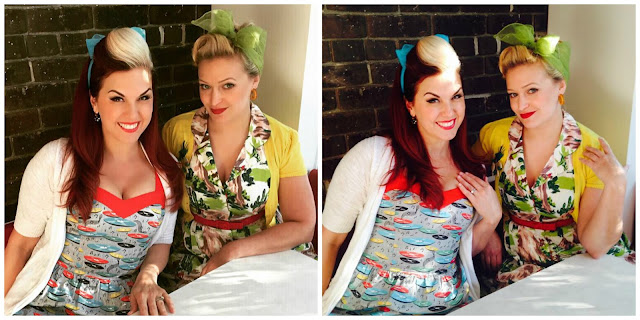 Give me a brief history of yourself and how your upbringing lead you to music.

I grew up in a town called Alma, Arkansas, a farm town in the Southern US. My dad is a musician and would always be playing Roy Orbison, Patsy Kline, Elvis, Buddy Holly, so I always listening to that kind of music growing up.  My dad is a bass player, he also plays trumpet, the harmonica, so I just knew from a very young age that I wanted to do music. I eventually moved to LA where I met Lary Bartley and we started writing music together. My voice is very low, similar to Patsy Kline's, so that style and that type of music always appealed to me. When we write, that's what ends up coming out. Tell me about the different styles that can be found in your music?

It's really diverse.  It's a lot of classic country, rockabilly, swing, big band, classic Rock'n'Roll too.

What eras inspired you as a person and your music?

I really like the 50s and 60s. The way I dress, my hair, the red lips, my music are all influenced by the eras that my Dad liked.  I enjoy the 20s, 30s, and 40s as well but it really doesn't influence my music as much.  The big band in my music is only a hint of 40s, it really has it's own identity. Someone commented on Facebook after I posted "Kiss Me" that "this sounds suspiciously like country music". Country music today is watered down pop/rock. It is really not country anymore, so I found that comment really cool, because he is considering what I do to be similar to classic country, like Patsy and Johnny, which is nice. I'm considered a roots artist because they don't know how to label me yet. Which is a good thing, it's individual.


Would you consider yourself a revivalist? Do you ever feel a responsibility to “do right” by the eras that influence your music?

That is interesting! Even though my music has elements of classic style, I am trying to do it
in a fresh new way. The younger generation may not listen to Buddy or Johnny but they may have heard of them. However, they won't know the Everly Brothers...it's sad that they don't or won't ever know who they are. So, yes I am trying to revive them but in a fresh new way. I also cover my favourite classic artists to do right by them. I do 60%/40% covers to originals. You want to keep them alive.  Hopefully it makes the younger generation go and check them out.


What instruments do you play? If there is more than one, which would be your favourite? Do you have a favourite make/model?

I play guitar, mandolin and piano.  I don't love piano, my mother made me play the piano, but as soon as I picked up a guitar, it made sense to me.  Guitar and Mandolin just clicked. I like a nice jumbo Gibson J200, the bigger the better right!? I just love Gibson guitars...I have a custom pick guard and my HB brand.  I love that guitar! 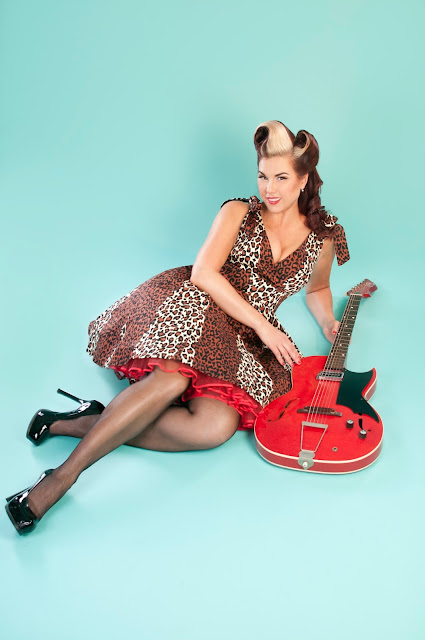 As your music is vintage-inspired. In the studio, do you use vintage recording methods or embrace new technology?

I am really a stickler for everything being live...real. Real strings, real drums, real horns...there is nothing worse than cheesy keyboard horns.  That is why my band is so big, I have an 11 piece band!  There are so many places you can see live music in Toronto, but how often do you see the kind of music I'm doing with a horn section and all these instruments you don't get to see live. We want to make it a real experience! 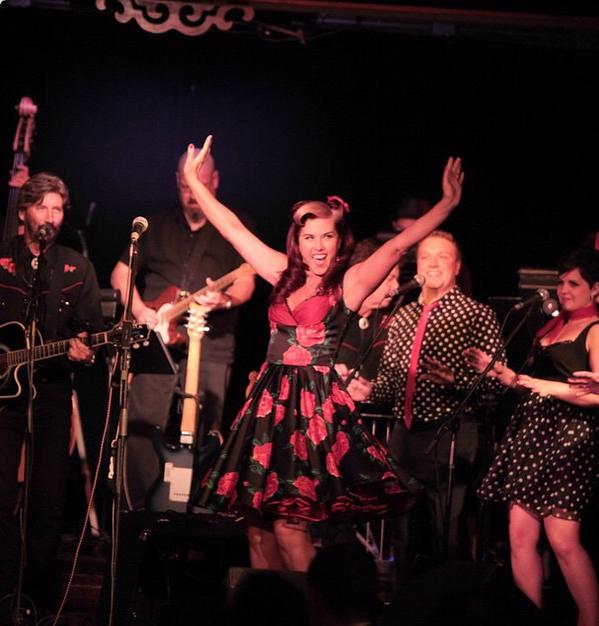 How is the audience different from a vintage crowd versus then lets say playing for a mainstream crowd?

In LA, bar crowds mostly just talk and ignore the music...but I was lucky, that never happened to me.  We would start playing and the audience would turn around to look and listen.  The music is a huge part of it, but there is also a visual aspect to it when you are doing anything pin up.  People love it, it captures their attention. I haven't had any issues, because they captivated.  My band wears silver jackets and we have choreographed background singers, so it's a real SHOW. Rarely do I have an issue, whether the audience is into vintage or not, they all seem to like it. Even my greeters and merchandise girls dress to my theme!

Tell me about the best show you ever played. Who is your favourite audience?

Pride in LA was pretty awesome, I opened for Debbie Harry!  It was a sea of men!  I have dual citizenship - American and Canadian, so when I was living in the US, I was hired to do a lot of USO shows which goes with the whole pin-up style. I went to over 10 countries. Each show was unique and I have so many stories from each country! Japan was pretty awesome, 3 girls fainted....I couldn't believe it!  Also, my show last year at Lula Lounge, was my first show in Toronto with the big band...it was just awesome and a great vibe!


Do you dress to augment the music or visa versa?

Both. I used to buy more true vintage, but now I'm so busy don't have the time. I used to scour through thrift stores for hours when I was younger, but now I buy a lot online.  My friend owns Pin Up Girl Clothing in LA, so I buy a lot from them, mainly because everything fits me.  Lately I have been finding all the boutiques in Toronto like Rosie the Rebel and Damzels, so I am planning a big shopping day!  Also, I am curvy so pin up works. You don't have to be stick thin, I am all about women being real women and the pin up style complements that. 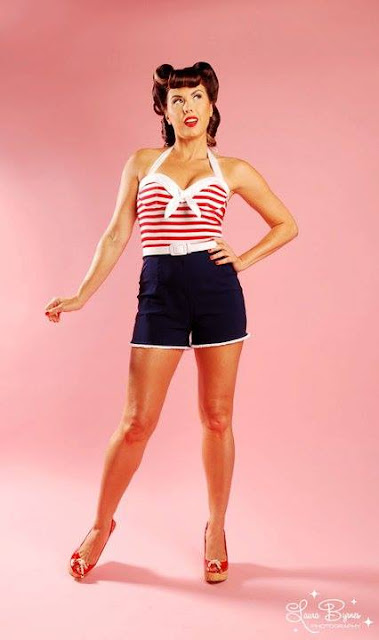 
With a new album "The Cat's Meow" releasing in July, what can fans hope to find both in the album and at your Toronto show?

The great thing about the show is what you hear on the album, is what you can expect at the show.  The same sound quality.  We have all those instruments live.  So that is pretty exciting and rare for a live show.  I was lucky to work with Pete Anderson, he worked on KD Lang and Dwight Yoakam, so I pretty much worshipped him my whole life. I never thought I would get the chance to work with him, so when he asked to do a record with me, I was just blown away!  He is an amazing producer and so cool. 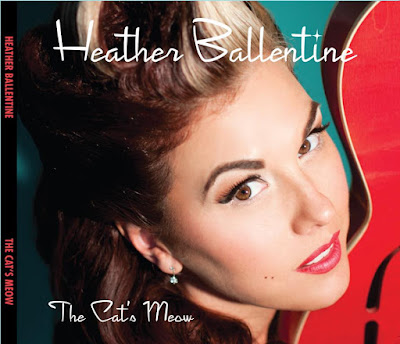 Top five artist of any genre that you are into right now?

Bruno Mars - I like his retro thing
Megan Trainor - she has great retro style
The Hives - they put on a great show
Mumford and Sons - they are kind of roosty and country
James Barker - their guitar player is incredible. Young, but incredible. Exciting

Top five albums of all time?

Dwight Yoakam - Guitars and Cadillacs
Pete Anderson - Birds above Guitarland - he is a genius!
Johnny Cash - Live at Folsom Prison
Everything Patsy Cline has ever done!
Buddy Holly - Greatest Hits is always on my record player
...and I love Elvis! I walked down the aisle to "I Can't Help Falling in Love" 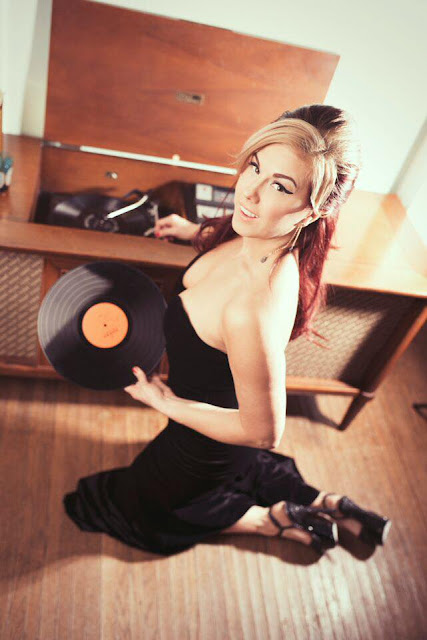 I want to have my own brand down the line.  I love the clothing, makeup, hair...I'd love to work with a boutique to create my own branding once the music is at a level that is can maintain itself. I definitely want to take pin up mainstream!

...and we couldn't AGREE more! 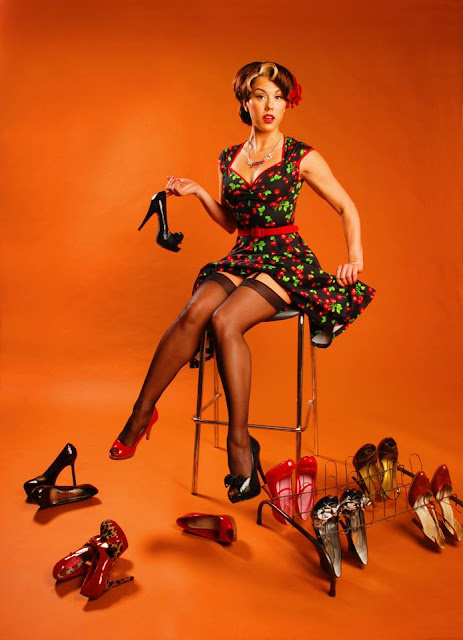 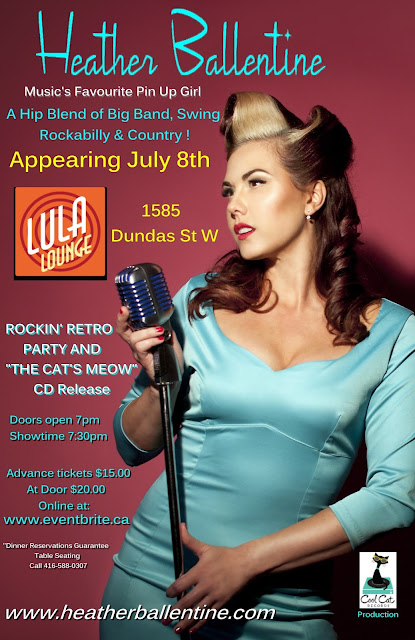 Her show will be a unique mix of songs from the new album and retro classics from the past that seamlessly blend the sounds of Big Band, Swing, Rockabilly and Country! 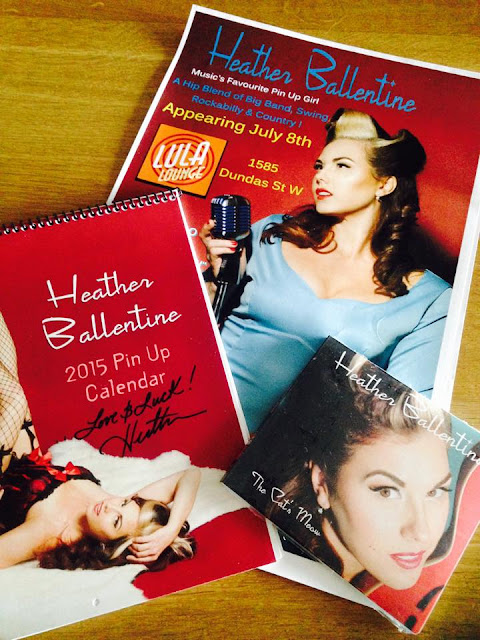 “Music’s Favourite Pin Up Girl”, Heather Ballentine, is a charming, talented, and down to earth Southern belle. She is an entrepreneur, singer/songwriter, pin-up model, and actress.
Her life-long pursuit of excellence began in Arkansas, where she was born. She grew up with passion for performing, and always knew what she was meant to do. Her mother was named after Marilyn Monroe, which sparked Heather’s interest in pin up fashion, culture and lifestyle. Her father, a musician with a fondness for retro music, encouraged her to listen to artists such as Elvis, Patsy Cline, Johnny Cash, The Everly Brothers, Roy Orbison, Wanda Jackson, and Buddy Holly, which became Heather’s musical influences.

In 2011 Heather moved to Canada and happily adopted it as her new home. Based in Toronto, she is actively building her pin up brand. She recently recorded with Grammy Winning Producer, Pete Anderson to create her album, “The Cat’s Meow”.
Her new single, “Kiss Me”, was released in May of 2015 and has garnered national video play on CMT and on CBC and multi-format radio. “Kiss Me” has also been viewed over 12,000 times on Youtube in just over a month since its release!
Heather and Pete have created her own signature sound that appeals to big band, swing, country, and rockabilly audiences alike. To see her unique live show is to fall in love with her personable retro charm!