This Sunday - Santa Claus is Comin' to Town! 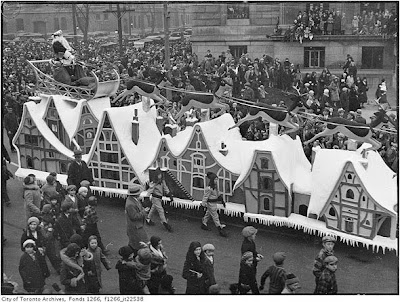 Did you know that Toronto's Santa Claus Parade predates the Macy’s parade by almost 20 years?!

Santa Claus would arrive by train at Union Station in 1905 to make his first pre-Christmas Eve tour through Toronto. 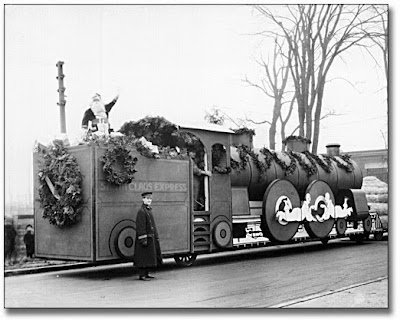 The parade originally sponsored by the T. Eaton Company managed to survive The Great Depression and two World Wars. Eaton’s staged the parade until 1982. 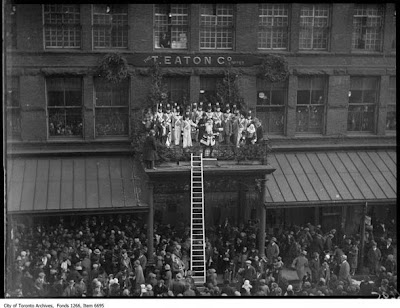 The following quote is from the book, “The Store That Timothy Built,” written by William Stephenson, published by McClelland and Stewart Limited in 1969 for the 100th anniversary of the T. Eaton Company. From chapter entitled, “The Happiest Day of the Year.”

"Easily the happiest and most popular way Eaton’s has devised to meet its customers is the Santa Claus Parade, held on a Saturday morning in November. Costing close to $100,000 to mount, stretching for at least a mile and a half, entailing the talents of 500 musicians, 1100 school children and two Santas, a visible one and a spare, both of whose identities are closely guarded secrets – Eaton’s Santa Claus Parade, in the flesh and on nation-wide colour television, officially inaugurates the hectic, joyous melee known as Christmas shopping."
"What makes the Eaton Parade so unique is that, alone of major parades, it features mainly fairy-tale and make-believe characters – not current stars of movies and TV; Paul Castle, the voice of Mickey Mouse, was allowed in the 1968 parade only because it was the 40th anniversary of the pie-eared rodent’s debut on the silver screen. Nor does the Eaton’s parade ever use grotesque heads, like those made for Mardi Gras parades in Brazil or Italy and resold to some U.S. stores for their Christmas parades; all the heads in the Eaton’s Parade are comical, not frightening."
"Eaton’s is the only parade that makes and owns its own costumes, more than 1000 of them. All the others rent them just for the day. Big stores like Macy’s in New York, Hudson’s in Detroit, Gimbel Brothers in Philadelphia, also stick to their own personnel for the marchers and riders. But Eaton’s gets thousand of applications each year from children wanting to be in the parade – so many that it has to ask some children to wait as long as three years – and is pleased to pay each a small fee for the day’s effort, plus hot chocolate and cookies at a convenient spot." 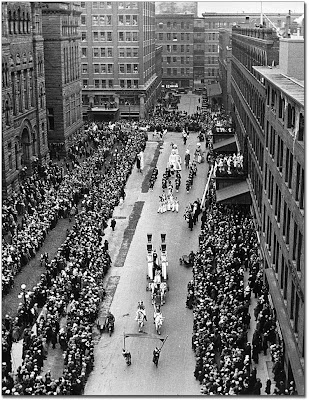 Although the first parade featured Santa alone, thousand of families would line the streets and pile into the departments stores, and  Massey Hall after the parade for that treasured glimpse of the Man in Red! 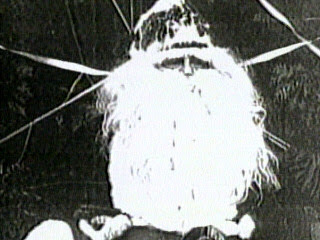 Despite surviving the shortages of 2 world wars the designers managed to upkeep the tradition and continually added to the splendour with floats, elaborate costumes and live animals! 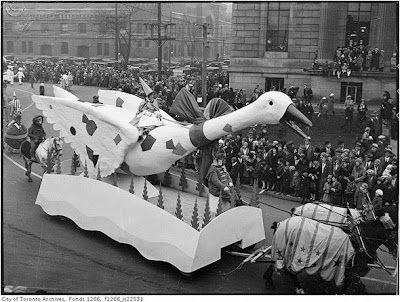 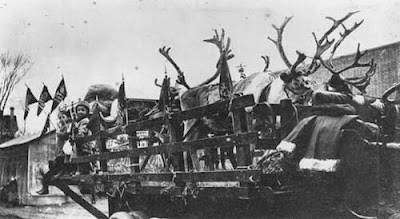 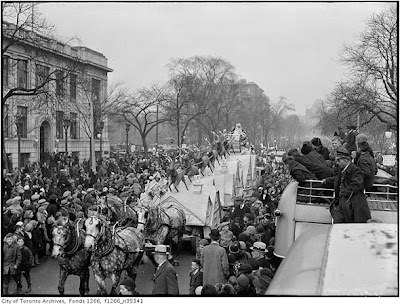 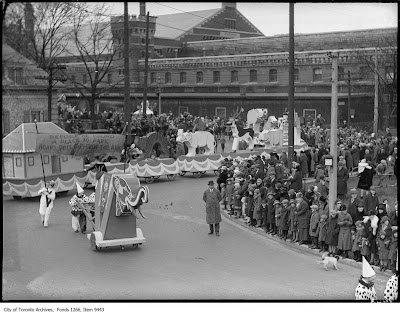 An overview of the Parade’s history:
(courtesy of the Official Santa Claus Parade website and CityNews)

The first parade wasn’t really a parade at all. It consisted only of Santa arriving at Union Station on December 2nd, and walking with the Eaton family to their main store. It was such a hit that it gradually became more and more elaborate, adding a horse drawn carriage, footmen and trumpeters. The seed for the eventual parade had been planted.

Eaton's arranged for Santa to be pulled by live reindeer, which had been imported from Labrador specifically for the Parade. The reindeer had a dedicated veterinarian who looked after them and supplied their special diet of moss. Following the Parade, the reindeer retired to the property of an Eaton's Executive outside Toronto. That year, children along the route started to march through the city along with Santa, stopping to dance and sing as they went. They dropped letters to Santa into baskets on poles carried by bearers. Every letter with an address received a personal response from Santa.


By this time, the Parade had seven floats starring nursery rhyme characters. The biggest float that year was a giant swan carrying a band of musicians and clowns, with Santa in the centre of it all. Mother Goose also became a Parade tradition, taking newer more elaborate forms each year.


This was the year Santa arrived by air. He touched down on the Aerodrome on Eglinton Avenue, seven years before Lindbergh arrived in Paris. He was to be pulled by horses with outriders dressed as lions. However, the horses balked at the costumes worn by the outriders and were subsequently banned from the Parade.

From 1925 to the late 1960s, the Toronto Santa Claus Parade floats were packed onto railway cars and shipped to Montreal for a Parade the following Saturday. That tradition eventually ended due to the FLQ bombings.

To escape from the realities of the Great Depression, families pressed their ears to the radio. Starting in the early 1930s, CFRB radio began broadcasting a month of dramatic programming that followed Santa's journey from the North Pole to Toronto. By the time the Parade took place, children and adults alike were beyond excitement. Santa brought with him a magic and mystery that gave everyone hope.


Mother Goose returns to the parade and becomes the longest continual float in service. It appears every year until 1960, each time painted a different colour.


During World War II when materials were scarce, most of the Parade costumes were made of paper. A big draw during this period was for children to watch the Parade from office buildings along the route. All the windows facing South were crowded with children, including the Park Plaza Hotel (today's Park Hyatt).

In 1948 Eaton's published a children's book called Punkinhead, the Sad Little Bear. It was about a teddy bear who wanted to be in the Santa Claus Parade. Eaton's published several books of Punkinhead's adventures, as well as colouring books, records and television commercials. He was so well-known that children cheered him when he marched in the Parade.

By 1950, the Eaton's Santa Claus Parade was the largest in North America and was first televised on CBC in 1952. For years after that, the Parade was filmed and packaged for schools with professional narration by such well-known broadcasters as Byng Whitteker and Don Harron.

There were 13 large floats in the 1957 Parade and nearly 20 smaller floats with two horse-drawn carriages. Two thousand people marched in the Parade that year, with the majority from Metropolitan Toronto Secondary Schools led by 30 teacher Parade marshals. The Parade was six miles long and began at 8:30AM - after two solid hours of makeup and dressing

1980 marked the 75th anniversary of the Parade and 1,700 volunteers participated in the 'Parade Salute', a special theme to mark the year. The Parade featured floats for Canada's major regions, including the Prairies, the Yukon, the West and East coasts. Punkinhead lead a float carrying children from 24 countries to honour the International Year of the Child.

Eaton's announced it was withdrawing from sponsorship of the Parade after 77 years.Within three days, Ron Barbaro and George Cohon formed a not-for-profit Organization and became Co-Chairmen and Founders. Together, they signed 20 Companies to sponsor floats in the first year. The tradition of the Celebrity Clowns began in 1983, when more than 60 Executives paid $ 1,000 each to hand out baloons, march and entertain kids along the Parade route.
1985

The lights around Queen's Park Circle were lit early for the Parade for the first time in 1985. Now there is an annual tree lighting ceremony in downtown Toronto during the days leading up to the Santa Claus Parade.

Between 1989 and 1991, the Santa Claus Parade formed an alliance with Russia (the Soviet Union) just as the Soviet era was coming to a close. In 1989, two Soviet broadcasters, Herman Solomatin and Tetyana Vedenyeva provided on-the-spot coverage of the Parade, which was broadcast to 250 million viewers in the Soviet Union via the Gosteleradio Network. Based on this interest, Russia was invited to participate in the Parade in 1991.

The parade reaches an amazing milestone – 100 years. And despite snow, wind, the Depression, two World Wars and the eventual bankruptcy of Eaton’s, there has never been a single year since it started that the Santa Claus parade hasn’t been staged in downtown Toronto.


"Today, there are more than 25 animated floats, more than 200 Celebrity Clowns lead the Parade and raise about $200,000 annually, while around 2,000 costumed participants march happily through Toronto's streets.
Toronto's Santa Claus Parade is the longest running children's Parade in the world"

This Sunday get out any enjoy to parade that has brought a city together for over 100 years! 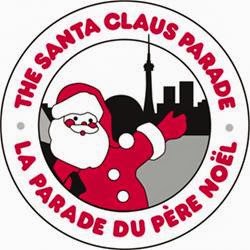 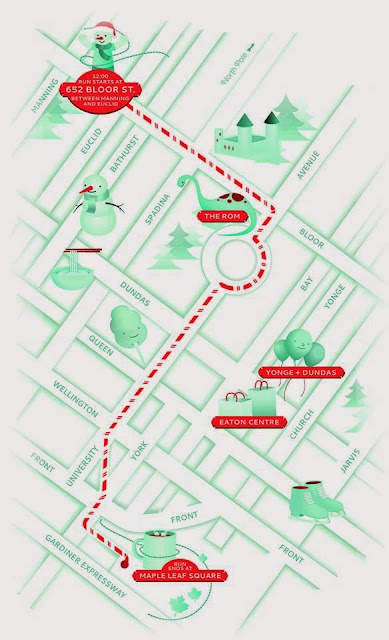